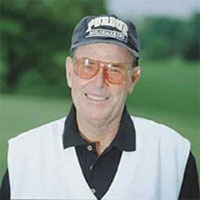 Pete Dye
Considered in many circles to be the most influential golf course architect of the last five decades, Pete Dye is now in his 80's and still designing golf courses. Pete comes by his career naturally and is a legend in the field of golf course design and construction throughout the expanding world of golf.

Although he was a champion golfer, Pete's interest was really in the design and maintenance of a golf course, so he decided to devote his time to designing and building golf courses.

A 1963 trip to Scotland profoundly impacted Pete's subsequent designs, which included small greens, pot bunkers, undulating fairways and wooden bulkheads. He began incorporating these concepts into his designs. This, in turn, influenced future golf architects and Pete has been hailed as the father of modern golf course architecture.
Pete was honored by the World Golf Hall of Fame with the lifetime achievement award, and is only the 5th architect to be inducted to the Hall. 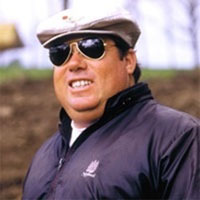 P. B. Dye
Following in the footsteps of his grandfather, father, mother, and brother, P.B. (Paul Burke) Dye has been "moving dirt" for as long as he can remember. Like his father's creations, his courses often include railroad ties, pot bunkers, and island greens. Embracing 'The Dye Way' — a personal commitment to "roll-up your sleeves" hard work and quality, he has no office, staff, or overhead and often lives on job sites, designing and building courses himself.
Close